This volume studies three West Iranian language groups that are either undefined or have been scantly analyzed. The first chapter, "The Languages of Taleqan and Alamut," studies nineteen kindred language varieties spoken in the Sāhrud basin in central-western Alborz; the second, "Biābānaki Language Group," studies the vernaculars spoken in four villages in the historical district of Biābānak, located on the southern edge of the Great Desert in central Persia; while the third, "The Komisenian Sprachbund," treats seven languages spoken in and around Semnan, located halfway between Tehran and Khorasan. Each chapter addresses phonology, morphosyntax, and lexis, following the areal typological approach developed for West Iranian by Donald Stilo. This approach is complemented for the Biabanaki and Komisenian groups by the longstanding historical-comparative method. Special attention is given to ethnolinguistics and the language contact phenomenon, as well as the historical geography of each region. 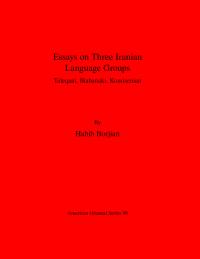