The Temple of Ramesses II in Abydos Volume 2: Pillars, Niches, and Miscellany

Of all the enormous monuments throughout Egypt and Nubia that Ramesses II (the Great; ca. 1279–1212 BCE) left behind, his temple at Abydos, built early in his reign, stands as one of his most elegant monuments, with its simple architectural layout and dramatic and graceful painted relief scenes. Though best known for its dramatic reliefs depicting the battle of Kadesh, the temple also offers a wealth of information about religious and social life in ancient Egypt. It reflects, for example, the strenuous efforts of the early Ramessides to reestablish the Osiris cult in Egypt—and particularly at Abydos—in the aftermath of the Amarna period.

Over a seven-year period, the authors of The Temple of Ramesses II in Abydos conducted a field project with the aim of producing an up-to-date and comprehensive architectural, photographic, and epigraphic record of the temple. This lavish volume, This lavish volume, the second of two documenting their results, presents miscellaneous elements of the temple, including the pillars, as well as translations of the inscriptions found in the temple. Volume 1, "Wall Scenes," (available here) contains more than two hundred detailed line drawings—accurately rendered according to modern epigraphical standards—of the temple's carved relief scenes, placed alongside their corresponding full-color photographs. The result is a masterpiece of modern epigraphic research and publication. 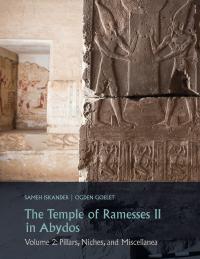 Temple of Ramesses II in Abydos