His Good Name: Essays on Identity and Self-Presentation in Ancient Egypt in Honor of Ronald J. Leprohon

The wish to affiliate with a specific cultural, social, or ethnical group is as important today as it was in past societies, such as that of the ancient Egyptians. The same significance applies to the self-presentation of an individual within such a group. Although it is inevitable that we perceive ancient cultures through the lens of our time, place, and value systems, we can certainly try to look beyond these limitations. Questions of how the ancient Egyptians saw themselves and how individuals tried to establish and thus present themselves in society are central pieces of the puzzle of how we interpret this ancient culture. This volume focuses on the topic of identity and self-presentation, tackling the subject from many different angles: the ways in which social and personal identities are constructed and maintained; the manipulations of culture by individuals to reflect real or aspirational identities; and the methods modern scholars use to attempt to say something about ancient persons. Building on the work of Ronald J. Leprohon, to whom this volume is dedicated, contributions in this volume present an overview of our current state of understanding of patterns of identity and self-presentation in ancient Egypt. The contributions approach various aspects of identity and self-presentation through studies of gender, literature, material culture, mythology, names, and officialdom. 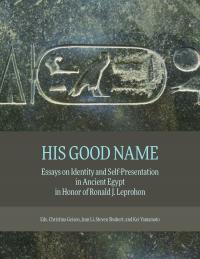