This book honors the memory of Brian Hesse, a scholar of Near Eastern archaeology, a writer of alliterative and punned publication titles, and an accomplished amateur photographer. Hesse specialized in zooarchaeology, but he influenced a wider range of excavators and ancient historians with his broad interpretive reach. He spent much of his career analyzing faunal materials from different countries in the Middle East-including Iran, Yemen, and Israel, and his publications covered themes particular to animal bone studies, such as domestication, ancient market economics, as well as broader themes such as determining ethnicity in archaeology. The essays in this volume reflect the breadth of his interests. Most chapters share an Old World geographic setting, focusing either on Europe or the Middle East. The topics are diverse, with the majority discussing animal bones, as was Hesse's specialization, but some take a nonfaunal perspective related to the problems with which Hesse grappled. The volume is also broad in temporal scope, ranging from Neolithic Iran to early Medieval England, and it addresses theoretical matters as well as methodological innovations including taphonomy and the history of computers in zooarchaeology. Several of the essays are direct revisits to, inspirations from, or extensions of Hesse's own research. All the contributions reflect his intense interest in social questions about antiquity; the theme of social archaeology informed much of Brian Hesse's thinking, and it is why his work made such an impact on those working outside his own disciplinary research. 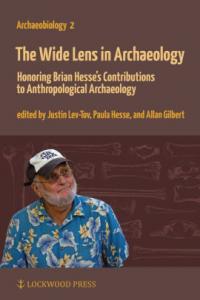